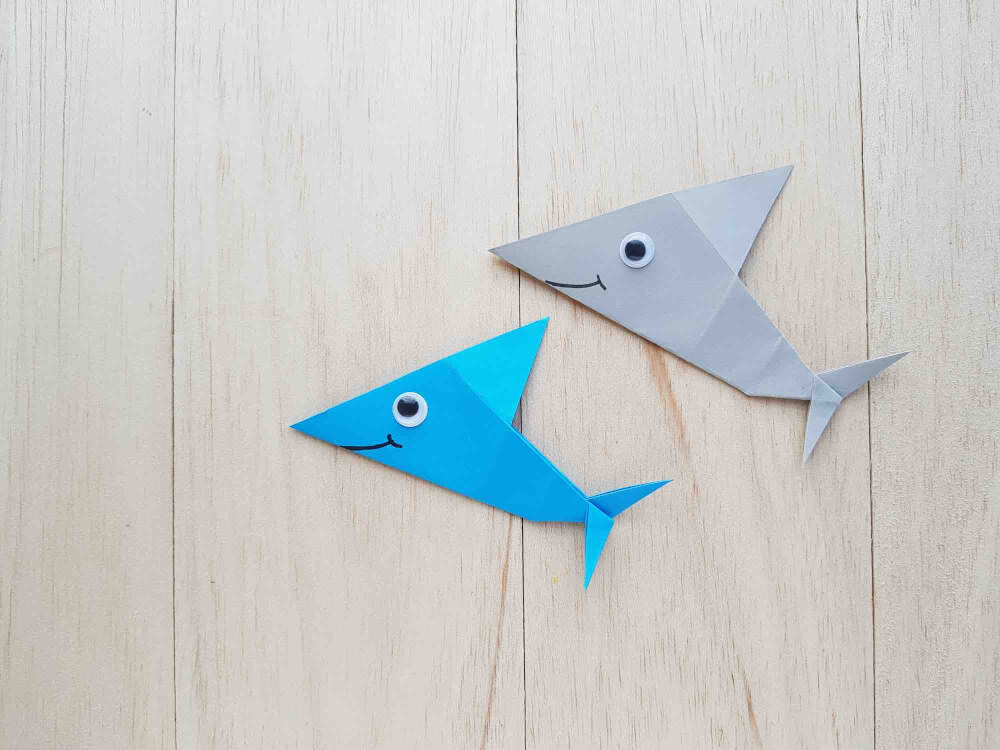 Looking for an easy origami project to do as a family? Keep scrolling to learn how to make an origami shark for kids!

This post about how to make a origami shark contains affiliate links which means if you purchase something from one of my affiliate links, I may earn a small commission that goes back into maintaining this blog.

The other day, my 4-year-old told me that his favorite animal is a shark. He had a whole story that basically implied they were just misunderstood creatures and not as scary as people think!

It was definitely entertaining to hear him talk about how he’d love to play with sharks on our next trip to Hawaii.

Of course, I gently reminded him that we always need to be careful when go into the ocean and probably shouldn’t engage with any sharks in the water.

But, I told him we could totally play with pretend sharks at home!

I figured we could work on a paper shark craft together so he could continue his imaginative play. So, we made an origami great white shark.

While these easy origami shark instructions are geared for kids, younger kids will definitely need an adult to help. This will mitigate frustrations.

Keep scrolling to learn how to make an origami shark!

Take a square paper sheet. Fold the paper into half diagonally on both sides to create creases.

Hold any corner of the square paper and draw it inside, aligning that outer side of the paper with the diagonal crease inside.

Do the same with the opposite corner. More precisely, align the top and left (or right, either one side) sides of the paper with the diagonal creases inside.

Hold the narrow corner of the current pattern and bring it all the way the opposite corner and fold the paper neatly. Unfold the last fold.

Take the narrow corner again and bring it all the way to the point where the 2 sides of the paper join. Unfold the last fold again.

Now fold the narrow corner to the point of the last crease (from the previous fold).

Use scissors to cut a line from the corner of either flap to the outer point of the bottom crease.

Fold the cut-out pattern outwards, this will be the fin of the origami shark. Now cut a line between the 2 flaps, from the narrow corner to the point of the 2nd crease from that end.

Fold out the 2 sides of the slit diagonally to opposite directions. These are the tail of the origami shark.

Fold the current pattern into half symmetrically.

Attach a googly eye and use a sharpie to draw a mouth of the paper shark.

And that’s it! I told you this was an easy origami shark craft!