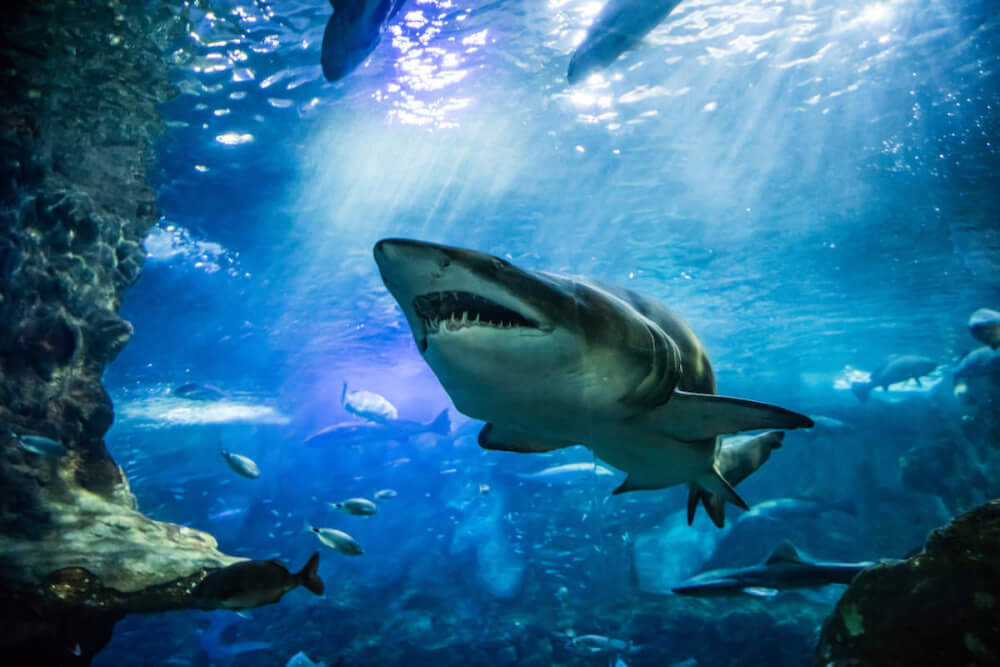 Are you planning a trip to Hawaii and want to know how dangerous Hawaii is in terms of wild animals? Keep scrolling to find out the most dangerous animals in Hawaii worth knowing about.

This post about the most dangerous animals in Hawaii contains affiliate links which means if you purchase something from one of my affiliate links, I may earn a small commission that goes back into maintaining this blog.

Are you planning a trip to Hawaii with your family?

The state of Hawaii is beautiful and full of fun activities for families. However, it’s important to know about the potential dangers that could be lurking in the water or on land when visiting this tropical paradise.

Today we’re going over some of these dangerous animals so you can stay safe during your visit!

You won’t want to miss out on all the amazing things there are to do in Hawaii just because there might be a few dangerous animals around.

We have everything from beaches and hikes to ziplining and snorkeling tours, so don’t let fear keep you away from an incredible vacation spot! Just make sure not to get too close if you see any signs of danger.

Keep scrolling to find out the most dangerous Hawaii animals to keep an eye out for.

Are there snakes in Hawaii?

Are there cockroaches in Hawaii?

Holy moly! YES! In fact, there are more than a dozen species of cockroaches living in Hawaii. They are a common sight in homes and buildings. The good news is that they rarely bite. But, they can get big and bother people with allergies.

Are there alligators in Hawaii?

No! Alligators are not native to Hawaii so the only place you might see them is at the zoo. Are there crocodiles in Hawaii? Nope! The main Hawaiian lizards you’ll find are cute little geckos, which can be spotted in hotels, homes, businesses, restaurants, etc.

What Are Some Dangerous Animals in Hawaii?

One of your biggest concerns when venturing into any ocean might be sharks. After all, a plethora of films and media have instilled sometimes unrealistic fears of these beasts. In fact, there have only been 8 confirmed shark attack fatalities on the Hawaiian Islands since 1828.

Even when looking at shark attacks overall, and not necessarily deaths, one shark attack only occurs on the island on average every 1.59 years. So while shark attacks should not be at the top of the list of your concerns, your safety only increases when learning exactly what to look out for in these cases.

The tiger shark is known as one of the most dangerous types of shark in Hawaii’s waters. They can grow up to 13 feet long and have tiger-like stripes across their body. Typically, sharks do not actually want to eat humans. Shark attacks mostly occur when a shark mistakes a human for a turtle or other creature.

The tiger shark has a very undiscerning palate and therefore doesn’t tend to swim away after biting an unfortunate human. When planning to swim in Hawaii’s waters, be sure to do some research ahead of time on the status and staff at the beach you’re visiting.

Eels, and moray eels, in particular, are dangerous creatures to be avoided in Hawaii. These creatures hide in underwater holes, sea beds, and beneath rocks.

Moray eels in particular can grow up to 13 feet long and have sharp teeth and a tendency to attack anyone that invades their space. Damage from eels typically comes from bites, which can result in muscle damage.

Otherwise, they are not very aggressive. To avoid moray eels, refrain from moving rocks or other plant objects around when swimming.

Eels are also most active at night, so avoid the idea of a midnight swim. In general, remember that swimming in the ocean is participating in a whole new realm owned by aquatic life. Respect life within the waters and stay aware of beach restrictions and guidelines to keep you and your family safe.

The scolopendra centipede, also known as the giant centipede, is known in Hawaii for its painful bite causing extreme pain, swelling, and red patches. These centipedes are relatively common on hiking trails. Clinics and emergency rooms in the Aloha state often house at least one patient suffering from these bugs that can grow to be 10-12”.

Bites from a scolopendra centipede are described as agonizing, especially when they occur on fingers or toes. If you see one outside, it’s best to steer clear of it. Be warned that they are more likely to explore for food at night to avoid the scorching sun.

If you are unlucky enough to get bitten by a giant centipede, do your best to remove it from your skin as quickly as possible as they tend to cling.

Monitor your pain and swelling, and visit a local hospital if your symptoms worsen. Many bites can heal without professional medical care, but local medics are also well-trained to handle these centipede bites.

Adding to our list of animals to steer clear of at night, is the brown recluse spider. Also known as the brown violin spider, this spider has spindly legs and markings reminiscent of the stringed instrument on its back. It will bite in self-defense but is not known to be particularly aggressive.

A bite from this spider however can cause pain, vomiting, and dizziness. Be careful in dark spaces and when setting up camping sites in the Aloha state. These spiders like to hide under woodpiles and rocks.

There are several types of jellyfish in Hawaii, with the box jellyfish being the most notable. This creature’s body is bell-shaped but still has a few “corners” for which it was named “boxy.”

The tentacles of the box jellyfish can deliver a nasty sting and have caused public health problems particularly at Waikiki Beach on the island of Oahu.

The biggest threats to a box jellyfish sting include difficulty breathing and shock. Less serious side effects include swelling, muscle weakness, and hives. Thankfully, the purple or blue colors of the box jellyfish make it relatively easy to spot.

To protect you and your loved ones from box jellyfish, make sure that you only swim on beaches with lifeguards on duty and up-to-date websites with water statuses.

Cone snails are a particularly important and dangerous animal to stay aware of when visiting Hawaii with young kids. They are relatively unassuming in appearance, with gorgeous and intricate shells.

However, these snails are called pupu poniuniu in Hawaiian, which translates to “dizzy shell.” And for good reason! Some species of these cone snails hold enough venom to induce anaphylactic shock in humans.

Thankfully, only a handful of cone snail species are dangerous enough to cause death. Other species can cause bee sting-like symptoms. Therefore, if you spot a cone snail on the beach of Hawaii, it’s best to hope that it is a less venomous species and steer clear.

Shell collecting is a fun beachside activity for many children, but it’s important to stay by their side to avoid sharp edges, general trash, and dangerous creatures.

Keeping Your Family Safe from the Dangerous Animals of Hawaii

When it comes to staying safe during your Hawaiian vacation, it all comes down to staying aware and following beachside protocol. Many of Hawaii’s creatures are glorious and non-aggressive unless you accidentally invade their space.

Keep a close eye on curious kids and enjoy observing Hawaii’s flora and fauna from a safe distance. Ready to plan your Hawaii trip? Explore the best experiences to book and places to stay here on Hawaii Travel with Kids.

Want to know more about Hawaii animals? Learn about the Hawaiian Green Sea Turtle and geckos!