If you love wine and are heading to Hawaii, you’ll want to head to these amazing Hawaii wineries that feature pineapple wine, grape wines, and wine with a tropical twist. Scroll to find out more!

This Hawaii Wineries post contains affiliate links which means if you purchase something from one of my affiliate links, I may earn a small commission that goes back into maintaining this blog.

Hawaii may not be the first state that comes to mind when you mention wine. However, the 50th state is home to a few vineyards and wineries, as well as a distillery or two.

Wine enthusiasts may not find a better-tasting wine than pineapple wine. The islands are known for producing outstanding pineapple wine, as well as some excellent grape wines.

Hawaiian grapes have raised as high as 2,000 feet, producing a nice-tasting product.

As a wine lover, visiting these Hawaii wineries and distilleries should be on your Hawaii bucket list. Scroll down for all the info!! 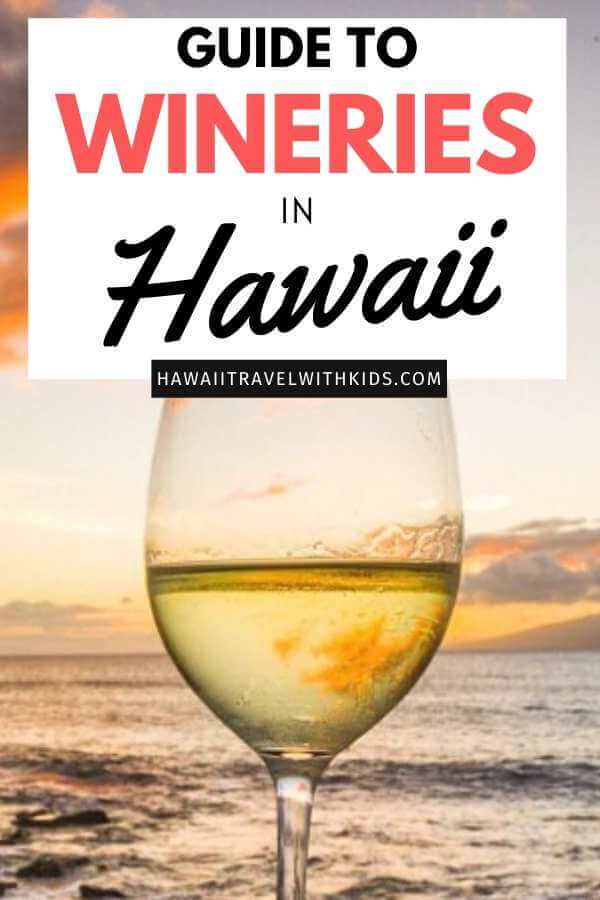 Where Can You Find Hawaii Wineries?

Hugging the southern slopes of Haleakala volcano, MauiWine’s story dates back to 1974, when the first grapes were planted.

Today, the vineyard takes up 23 acres of Ulupalakua Ranch. As you visit the winery, enjoy a tour of the historic ranch. Then, sample some of the finest wine produced off the mainland.

With a California winemaking influence in the early days, MauiWine has created 15 varieties of wine, with whites and reds, as well as the popular pineapple. The tasting room, itself, is a look into Hawaiian history.

Located inside the King’s Cottage, the building was constructed for King Kalakaua, who would visit Ulupalakua during his reign.

Enjoy a flight of four wines during your visit. For an intimate tour and wine tasting, reserve a spot in the Old Jail. Once used as the office for Captain James Makee, learn about growing grapes and winemaking, followed by a special wine tasting.

Sign up for a Pineapple Tasting Tour, which includes seeing the farm, MauiWine, a distillery and a brewery plus a gourmet lunch

Located on the Big Island, Volcano Winery grew from a hobby.

Lynn “Doc” McKinney long practiced making wine and beer while living on Oahu. But, when he decided to leave the island and move to the Big Island of Hawaii, he decided to open a winery.

Since 1986, Volcano Winery has produced outstanding wine. McKinney settled on Volcano because of its location at about 4,000 feet. Planting his set of grapes, McKinney opened the winery to the public in 1993. Later that decade, he sold the winery and vineyard to Del Bothoff, whose family still runs the operation.

During your visit to the winery, enjoy a flight, which consists of samples of eight wines. A Vintage Tasting gets you samples of two estate wines. You can also try a flight of Volcano Winery’s teas.

Based in Kailua, Oeno Winemaking is a different type of winery.

While not growing its own grapes, they buy pressed grapes from distributors to create their own wine. However, the truly neat part of Oeno Winemaking is creating your own label.

Open since 2008, they host winemaking parties, where people can choose the grapes to be used to create their wine. Once selected, the wine process includes fermentation for 4-6 weeks. Then, stop in to bottle your wine. You have your very own label.

However, if that’s too much work (or fun), you may want to consider having a flight of wine to sample. With eight wines to choose from, if two people order the flight, then all eight can be sampled. Otherwise, you’re looking at four wines per flight.

Where Can You Find Mead or Beer in Hawaii?

Kaka’ako is a really cool arts and warehouse district on Oahu. Visitors can take a 2.5 hour bike tour to some of the hippest spots to sip craft brews from local pubs and tasting rooms.

You’ll hear all about Honolulu’s brewery scene as wells as Hawaiian street artists as you pedal your shared bike (with up to 15 other people!)

Hawaii’s only meadery, Nani Moon Meadery technically isn’t a winery or a brewery.

Mead is considered its own drink as it is produced differently than wine and beer. A honey wine, mead is one of the oldest beverages in history.

Stephanie Krieger made mead in her garage for about eight years before opening Nani Moon in 2008. With six hand-crafted varieties of mead, each label is specially designed. Each mead has a unique flavor and taste, including pineapple, ginger and macadamia. The meadery also creates outstanding cocktails.

Nani Moon offers tours of its facilities, as well as tastings.

The Best Hawaiian Distilleries to Check Out

Producing outstanding spirits, such as vodka, whiskey, rum and gin, the distillery uses oak barrels to age its spirits. Offering daily tours that end with a stop at the testing room, a visit to the distillery makes for a memorable experience.

Believing in a connection with the land, the owners of Hawaii Sea Spirits utilize organic farming on their 80-acre farm to use the crops, such as sugar cane, that are used to create their vodka line.

The company named its original vodka named Ocean Organic because they felt it connected with their beliefs.

With pineapple playing a role, Hawaii vineyards and wineries have earned a reputation of producing excellent wines.

As you visit these Hawaii wineries and distilleries, enjoy sampling different wines that can be found on the mainland. Tour the vineyards and learn what goes into making a great bottle of wine.

Things to Do in Hawaii with Kids: Sea Life Park in Oahu

Oahu Surfing On The North Shore: What You Need to Know

Experience Yoga on Maui: Top 10 Places to Relax and Meditate