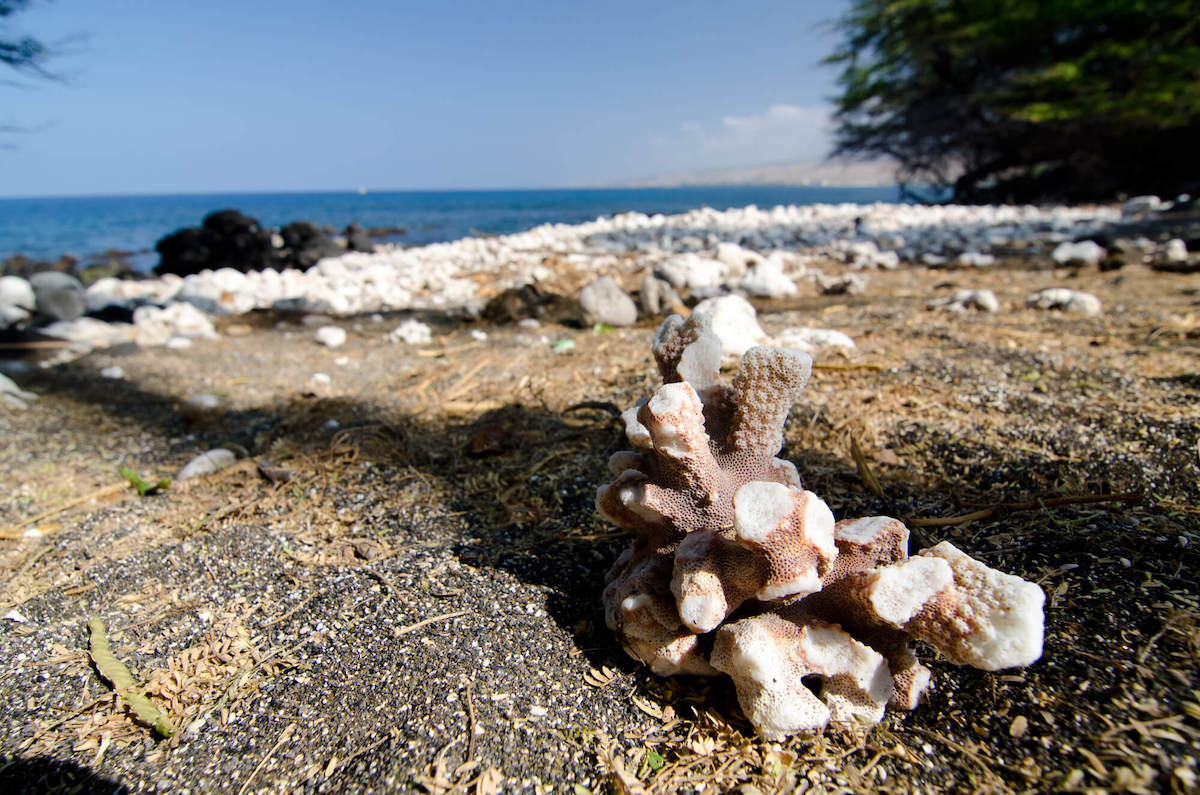 This post about can you take coral from Hawaii contains affiliate links which means if you purchase something from one of my affiliate links, I may earn a small commission that goes back into maintaining this blog.

Are you planning a trip to Hawaii and would like to know whether you’ll be able to bring coral back home with you?

If so, there’s probably a good chance that you have a few other questions that need to be answered.

After all, nobody wants to end up paying a big fine at the end of their Hawaii vacation because they didn’t know any better.

I’d love to answer some of your concerns for you, including, can I bring coral home from Hawaii?

Is there coral in Hawaii?

Absolutely! In fact, the 8 main Hawaiian islands are surrounded by 410,000 acres of live coral reefs. They even have coral species that aren’t found anywhere else in the world. That’s why we need to be careful around coral in Hawaii.

Is the coral in Hawaii dead?

Yes and no. In 2014 and 2015, there were some bleaching effects and temperature changes which killed up to 50% of Hawaii’s coral reefs.

Is there colorful coral in Hawaii?

Not usually. While Hawaii coral reefs are gorgeous, you won’t find the brightly colored coral that you see in underwater photos in other tropical places.

Coral reefs may closely resemble rocks, but they’re actually alive and breathing creatures just like you and me.

However, these marine habitats have recently become endangered. This is why there are so many laws that have been set in place to help protect them.

The islands of Hawaii are home to three different coral types, including fringing, atoll, and barrier reefs. A few of the common ones that you may come across when visiting are called lace coral, cauliflower coral, antler coral, finger coral, rice coral, and mushroom coral.

If you’re hoping to see some of the best coral reefs in Hawaii, you have to know where the best places in Hawaii for scuba diving are.

Here are 20 snorkeling spots that will provide you with plenty of wildlife viewing opportunities, and an up-close look at the beauty, as well as many of the sea creatures that live on these Hawaiian coral reefs.

If you’re planning a trip to Maui, you’ll be excited to know that around the island is also where you’ll find some of the best coral reefs in Hawaii.

While Maui’s coral may not be as colorful as other reefs, they are still beautiful regardless.

Coral Gardens is a protected Maui coral reef area where you’ll find excellent snorkeling and scuba diving opportunities. And it provides the perfect environment for marine life to flourish in these waters.

Can I Bring Coral Home from Hawaii?

Finally, the answer to the question you’ve been wondering is, can you take coral from Hawaii? To keep it short and simple, the answer is no.

Hawaii coral laws do not allow anyone to “take, break, or damage, any stony coral, including any reef or mushroom coral.”

Can I Take Dead Coral Home from Hawaii?

Now that you’ve accepted the fact that taking live coral is illegal, you may still be wondering, is it illegal to take dead coral from Hawaii?

Some of you will be upset with what I have to share, but the answer is yes.

Taking dead coral from Hawaii is also considered illegal. So don’t try and sneak any back with you on the plane because things won’t go well for you.

Can You Take Sand from Hawaii?

Up until 2013, visitors were able to take sand back to the mainland with them. However this changed when a large quantity of black sand started disappearing from Punalu’u Beach along with other black sand beaches.

Today, taking sand from Hawaii is considered illegal, and you could face fines of up to $100,000, so don’t get caught doing it. The same can be said about taking black sand from Hawaii.

Why Are There No Seashells in Hawaii?

When you’ve finally arrived at your Hawaiian beach destination, it won’t be long before you start asking why are there no seashells in Hawaii? The truth is, seashells are out there, but they’re very hard to come by.

That’s because the ocean waves smash most of them on reefs and lava rocks on the ocean floor. So by the time they reach the beach, they’ve been pulverized to sand and small sentiments.

However, most of the seashells that you can find in Hawaii can be seen down in the coral reefs when you’re snorkeling or scuba diving.

Can You Take Seashells from Hawaii?

Some people will argue and say that you can’t take seashells home with you on a plane, but that isn’t the case.

You are allowed to take small amounts of seashells back home with you as long as you don’t try to sell them. And good luck finding them, because they’re scarce.

Can You Take Rocks from Hawaii?

Just like with seashells, taking rocks from Hawaii in small amounts for your personal use is permitted by the Division of Land and Natural Resources.

But again, you’re not allowed to sell any of the rocks that you’ve collected from Hawaii.

Can You Take Lava Rock from Hawaii?

No. Taking anything out of a National Park is against the law anywhere in the United States, and that includes lava rocks from Hawaii.

When you’re visiting any National Park, a good rule to follow is that you should leave everything the way you found it.

If that isn’t enough to deter you, legend has it that stealing volcanic rocks from Hawaii will bring you bad luck for the rest of your life.

Can You Take Coral From Hawaii?

So, that about wraps it up. Taking coral from Hawaii is not only illegal, but it’s also something that you shouldn’t feel good about doing.

It’s best to leave coral reefs the same way that you found them. The truth is, coral reefs are already dying at an alarming rate because of humans.

Instead of being part of the problem for underwater marine life, look into seeing how you can do your part by supporting research projects like Hawaii Coral Reef Initiative.

Looking for more Hawaii travel resources? Find out the worst time to visit Hawaii, when the Hawaii rainy season occurs, how to visit a Hawaii pineapple farm, and the best books set in Hawaii.