Planning a trip to Oahu and want to see some epic beaches? Find out 7 of the best North Shore Oahu beaches you have to see to believe! Scroll to see them all!

This North Shore Oahu beaches post contains affiliate links which means if you purchase something from one of my affiliate links, I may earn a small commission that goes back into maintaining this blog.

Oahu has some of the best beaches in Hawaii. With golden sand, roaring waves, and palm trees, what’s not to love?

If you are interested in watching some incredible surfing while you relax at the beach, you’ll want to head up to North Shore Oahu.

Here’s where you’ll find some of the top surfing beaches in Hawaii that you might recognize from movies and TV shows.

The North Shore has a laid back vibe and is the perfect spot for beach lovers. 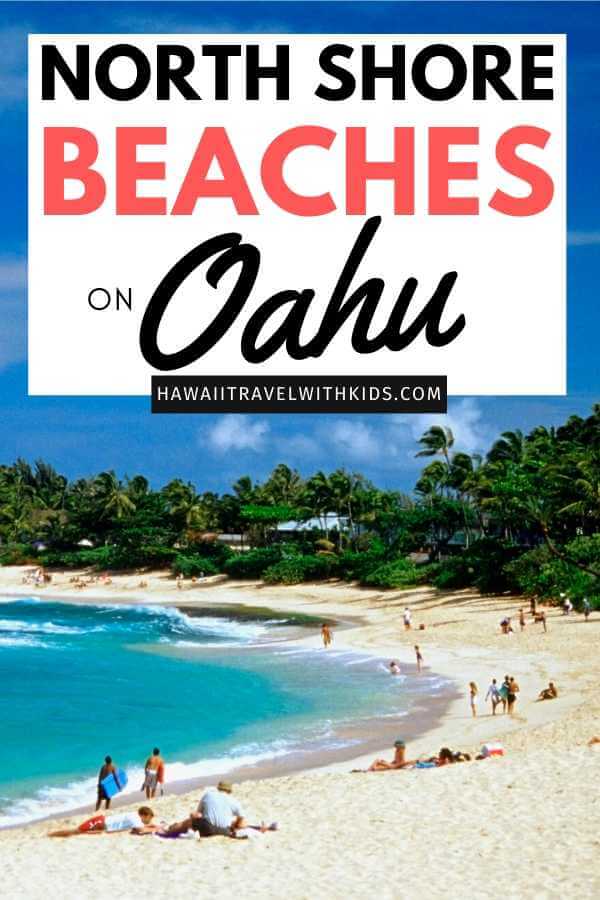 There are lots of amazing beaches on the Northern Shore of Oahu, but Waimea Bay makes it to the top of the list.

This is because of the plethora of things that fun lovers can do while they hang out on one of the most popular beach parks in all of Oahu.

Start out by taking a daredevil – but actually safe – dive from the famed rock that sits half-submerged at the shoreline.

Snorkel down into the deep, surrounded by fish and turtles, and explore the tunnels that can be found beneath the rock. You can also surf, rock climb, and take amazing photos.

Read more about snorkeling on Oahu

Having being named after the three table-like sections of reef that become visible during low tide, Three Table Beach is one of the most charming beaches on the North Shore of Oahu.

It is quite popular as a spot for snorkeling and diving during the months of May – September.

The water is quite clear and divers can usually see a variety of fish in numerous colors, sea turtles, as well as underwater lava tubes.

While the beach is also a popular surf spot, only experienced surfers dare to ride in the winter, as the surf becomes unpredictable.

As one of the hosts of the 2019 event, the Vans Triple Crown of Surfing, Sunset Beach is one of the most famous surf spots in Oahu.

Lots of people, from professional surfers to lovers of the sport come from different places just to get a crack at the amazing waves that are present on this beautiful beach.

Not only do surfers love spending time at Sunset Beach during the surfer season, but families are also able to enjoy themselves in summer when the waves are calmer and children can swim in the water.

Of course, regardless of the season, the view of the sunset at Sunset Beach is one of the most amazing things you will ever see.

While beaches like Three Tables and Sunset are known for having professional level surf waves, Haleiwa Beach Park offers calmer waves that are just perfect for beginner surfers.

It is also great for swimming and there are lifeguards on hand to protect novices from getting in harm’s way.

There are also showers to clean up before or after a swim. Adjacent to the beach, there is a park that is equipped with picnic tables where friends and families can hang out and share food, music, and fun.

The beauty of Laniakea Beach is visible as soon as you set foot on the sands and look at the wide, open sky. In fact, the word “Laniakea” translates to “wide sky.”

This breathtaking beach is also known as Turtle Beach because of the astounding number of sea turtles that come to hang out on the beach.

When they are not staring at turtles, visitors to Laniakea Beach are usually taking a swim in the water in the summer, or getting on top of the surfing waves in the winter.

Home of the tubular wave, the Banzai Pipeline is another of the most famous beaches in North Shore Oahu and is usually the host of the finale for the Vans Triple Crown of Surfing competition.

This is, of course, during the wintertime when the water is only suitable for professionals.

During the spring, the water is calmer, allowing for family-related recreational activities like swimming, water skiing, snorkeling, and more.

During the months from June to September, however, visitors are asked to stay out of the water to avoid being stung by limu which washes up to the shore.

Translated to “white shell” in the native Hawaiian, this gleaming beach is tucked just off the Kamehameha Highway on the northern end of Waimea Bay.

Hidden from the popular gaze, this little beach cove is usually quiet and calm during summer and is frequented by snorkeling lovers.

Visiting the beach park during the winter is not the best. It has two access points for swimming; Shark’s Cove and Three Tables beach.

The Shark’s Cove access is tricky and wearing water shoes is recommended.

What Else to do in North Shore Oahu

The North Shore of Oahu will not disappoint you. From the beautiful beaches and tasty shave ice to the adventurous activities and authentic poke, there is something for every family member to enjoy!

Next time you go, be sure to plan your vacation around some of these best North Shore Oahu beaches! 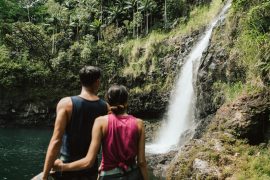 The Best Things to Do in Hilo Hawaii: Where to Stay, Eat, and Play 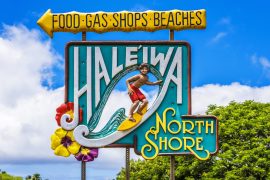 33 Things to do in Haleiwa, Oahu 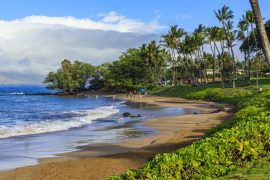 Visiting Hawaii in February with your Family: a Complete Travel Guide