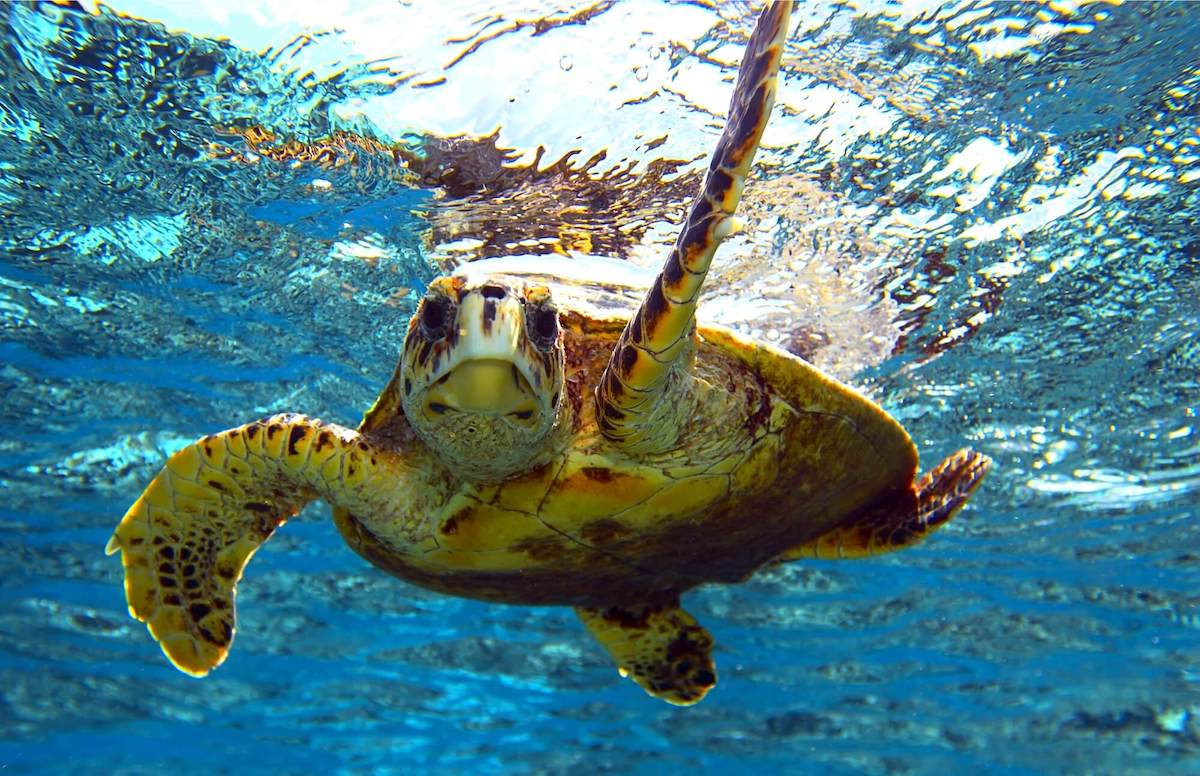 Are you looking to spot some Hawaiian Green Sea Turtles on your next trip to Hawaii? Keep scrolling to find out where you can swim with turtles in Hawaii!

This list of where can you swim with turtles in Hawaii contains affiliate links which means if you purchase something from one of my affiliate links, I may earn a small commission that goes back into maintaining this blog.

Wouldn’t it be an incredible vacation experience to be able to say that you had the opportunity to swim with turtles in Hawaii?

Perhaps you’re looking for more of an underwater adventure, where snorkeling with turtles in Hawaii sounds more like it? You’re in luck!

Swimming with turtles in Hawaii is an experience you will never forget!

There are plenty of amazing places to swim with sea turtles in Hawaii, but I’d like to focus on two islands in particular. These islands offer great opportunities for both underwater and surface encounters with these creatures.

Not only will you be able to see these creatures up close and personal (but from a safe distance), but you might even get the chance to swim with them if you’re lucky!

These are some of the best places to swim with sea turtles in Hawaii.

Is it illegal to touch a turtle in Hawaii?

YES! Do not touch sea turtles in Hawaii!!! It is illegal to touch or harass sea turtles as they are all protected by the Endangered Species Act. You also aren’t suppsed to chase them, invade their space, or swim withing 20 feet of them. Please be respectful and keep a safe distance.

What does the sea turtle mean to Hawaiians?

In the Hawaiian language, sea turtles are called “honu.” They are sacred to Native Hawaiians because they represent protection, good luck, endurance, and long life. You’ll see depictions of sea turtles in petroglyphs and in kapa cloth displays.

Are sea turtles harmful to humans?

While sea turtles aren’t traditional aggressiv creatures, they will bite people if they feel they are in danger. They have really sharp beaks an strong jams so their bites can case severe brusing and even break bones. Just leave lots of space for sea turtles when you see them in Hawaii.

Are you visiting the island and are wondering where Oahu sea turtles can be found? Maybe you’re longing to swim with the turtles in Oahu?

If you know where to look, it isn’t all that difficult. At times you’ll see them basking on the beaches and later on swimming beneath the Oahu waves. These are a few of the best places where to see turtles in Oahu.

Unless you need your eyes checked, there’s no way you could possibly miss spotting a sea turtle when you visit Turtle Beach in Hawaii.

Although its real name is called Laniakea Beach, it’s the most reliable and best place to see turtles in Oahu. This is how it ended up with the nickname in the first place. Read my full guide to Turtle Beach Oahu.

If you’re planning on snorkeling with sea turtles in Oahu, Electric Beach is a fabulous destination to do so. You may not appreciate the power plant that’s clearly noticeable, but scenic landscapes aren’t exactly what you’re there for.

The ocean water is absolutely gorgeous there and you’ll find plenty of sea creatures as well as sea turtles beneath these waters.

When it comes to Oahu snorkeling with turtles, it doesn’t get much better than paying a visit to Haleiwa Beach that’s located in the northern part of the island. It’s one of many amazing North Shore beaches.

That’s because the waters are extremely clear and sea turtles are known to frequent there. Plus, there are tons of things to do in Haleiwa!

Don’t allow the name to mislead you, because Cockroach Cove is another great place for Oahu snorkeling with turtles that you won’t want to miss.

It’s such a beautiful beach paradise that even notable films such as the Pirates of the Caribbean and 50 First Dates were filmed there.

Just keep in mind that the waters there can be a bit fierce, so it’s not an ideal place for inexperienced swimmers.

Should you be staying in the Honolulu area, you’ll be excited to hear that swimming with turtles in Honolulu Hawaii is a popular thing to do there. Waikiki Beach is certainly towards the top as far as the best place to snorkel with turtles in Oahu.

It’s also common to spot turtles making their way towards the beach. So, make sure that swimming with turtles in Waikiki Beach is among the top activities that you participate in while you’re there.

Other Oahu Beaches Worth Mentioning

All of the beaches mentioned above were some of the best places for you to swim with sea turtles in Oahu. But the following are a few other beaches and destinations that you possibly might witness sea turtles if you’re there at the right time.

Hawaii Turtle Tours is considered one of the best tours in all of Oahu, promising you memories that will last a lifetime.

You’re guaranteed to come across turtles in Oahu as you visit its northern shores where they’ll be swimming in their natural habitat.

Private snorkeling tours are also available and they’ll even allow you to come up with your own itinerary. This is one of the coolest ways to snorkel with sea turtles in Oahu.

What Are Best Places to Snorkel with Turtles in Maui?

Are you actually staying somewhere on the island of Maui? If so, you’re also in for a treat! The island of Maui also happens to be one of the best places to swim with turtles in Hawaii.

What are the Best Maui Sea Turtle Tours?

Want to avoid not seeing a sea turtle during your entire Hawaii visit? Maui has several turtle tours that you can choose from that are also worth mentioning. Each provides a unique experience, whether you’ll snorkel, sail, or kayak amongst these sea turtles. A few of them include:

What’s the Best Time to See Turtles in Hawaii?

Sea turtles prefer calm waters with gentler waves, which is why the summer months are the best time to see Hawaii sea turtles.

But if you’re still having trouble spotting them, the midday hours are typically when they show up on the beach, around the hours of 11 am and 3 pm. That’s because they enjoy basking in the heat of the hottest part of the day.

Can You Touch Sea Turtles?

In short, the answer is no. Sea turtles are federally protected creatures, where touching them is considered the same as disturbing them.

If you’re heading to Hawaii with kids and want to teach them a bit about Hawaiian Green Sea Turtles, you’re in luck! i actually have some cool materials you can use:

Swimming with Turtles in Hawaii Wrap Up

The islands of Oahu and Maui provide plenty of opportunities to not only spot but even swim with sea turtles. It’s an unforgettable experience that you’ll be able to share with your family and friends back home.

Don’t miss one of these opportunities to swim with turtles in Hawaii when you’re there visiting.